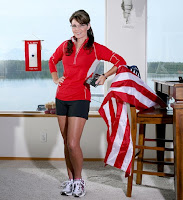 @BorowitzReportAndy Borowitz
I would have been more offended if Tracy Morgan said Sarah Palin was great presidential material.
I couldn't agree more !! Many have a fascination with Sarah Palin and a lot of that is directly attributable to her good "MILFY" looks. That's all good . Go ahead and have your "squatting in a deer-stand" fantasies about Mrs. Palin. However, what is HIGHLY OFFENSIVE is the notion that this dim bulb has the qualifications to be the President of the most powerful nation in the world with such recent intelligent takes as "the Russian focus on Sputnik and their space program is what eventually toppled the Soviet Union". Huh ? How do you pillow talk with THAT ??


There are some really funny, thought-provoking, and downright HILARIOUS people lurking around in the Twitter-verse. The #TweetOfTheDay is dedicated to those tweeps that either made me laugh or stop and think.
Posted by Dubwise at 3:58 PM