In this election season with so much at stake in the midterm elections, it seems as if every weekend features a new rally aimed at revving up and exciting a certain segment of the population.This past weekend it was the comedians turn to have their impact on democracy. Comedians Jon Stewart and Stephen Colbert marched on Washington on Saturday, October 30, 2010 in the first but hopefully not last "Rally to Restore Sanity and/or Fear". Though both comics are left leaning in their political ideologies, no one was quite sure what to expect of this rally from the King and Prince of political satire in this somewhat unusual but turns out very necessary rally.

For regular viewers of Stewart's "The Daily Show" and Colbert's "The Colbert Report", you're well aware that both comics take numerous shots at politicians being politicians with their frequent lies and bad behavior but both tend to dish it out a lot more towards right-wing politicians (perhaps because they lie a lot more ... I'm just saying ). With this in mind, one would expect the rally to be 2 and 1/2 hours of right-wing Republican bashing with about 30 minutes of "Oh ... and Democrats, you need to do better also" type talk. This assumption could not have been further from the truth. This rally was as "non-partisan" as possible and really didn't strongly advocate one political ideology over another. For the 3 hours of the rally, it turns out that it was about 2 and 1/2 hours of entertainment (with performances by The Roots, John Legend, Cat Stephens aka Yusef, Ozzy Osbourne, Mavis Staples, The Ojays, Sheryl Crow etc.) and about 30 minutes of very important thought provoking political commentary. 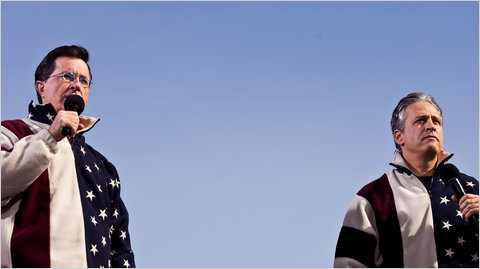 The political commentary was saved for the very end of the rally and should have left all with very important thoughts to go home and meditate on and discuss amongst their peer groups. As the name of the rally indicates, the main point of the rally was to restore sanity in a nation often overcome by fear, vile rhetoric, and not much room for substantive discussion. For about 15 minutes towards the end of the rally, Jon Stewart ventured out of comedian mode and into the mode of political philosopher as he made some very key points that underscored the importance of the rally.

The tone of the political discourse in this nation has taken a sharp turn for the worst, particularly since the beginning of the Obama Administration (coincidence ? I don't think so). Whether on the left-wing or on the right-wing, the highlight of most cable news and AM radio talk shows features guests yelling at the top of their lungs shouting their point of view and completely drowning out the tone of what the other side has to say. When ideological disagreements turn in to the other side being characterized as Socialists, Marxists, Communists, Nazis, and a bunch more over the top rhetoric, it is difficult to find any common ground on which to work.  We accomplish NOTHING as a nation when this is our only means of discussing intrinsically very difficult issues.

In law offices, doctors offices, accounting firms, software companies, and many other businesses all across the United States, Democrats, Republicans, Jews, Muslims, Christians, Blacks, Whites, and Latinos find means of moving beyond their differences and working together EVERY DAMN DAY to get things done. Why can't this be done also in Washington ? The main point of the rally is that IT CAN BE DONE. We simply need to restore a little sanity, tone it down, and work together to advance the greater good of this nation. Difficult but NOT impossible. It's been done before. Why not now ?
Posted by Dubwise at 6:14 PM