BOTH Left AND Right are WRONG

In the aftermath of the Midterm Election "shellacking" that the Democrats took at the hands and wallets of Republicans, both parties seem to be completely misinterpreting exactly what the results of last Tuesday's election truly mean. Was this a rejection of the Obama administration agenda ? Was it a yearning for the "good ole bad days" of Republican leadership ? Was it a protest vote born out of frustration of not enough economic progress in 2 years ? Was it Obama "not going far left enough" and disheartening the liberal base ? Wherever you stand on the root causes of a nationwide Republican resurgence, one thing is perfectly clear. BOTH liberal and conservative columnists, bloggers, and TV analysts have been insufferable in their over-the-top rhetoric in overanalyzing what the midterm results truly mean. 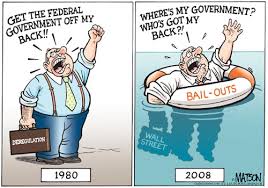 For the overly giddy Republicans, they have taken the election results to mean that the country has "soundly rejected the Obama agenda" and is ready to try it their way again. They somehow have concluded that the country is now yearning for their "under-taxing", "over-spending", and "regulation-free" manner of governing which resulted in the worst recession seen since the Great Depression and the magic of turning a record budget surplus into a record budget deficit. How could we not miss such GENIUS policies ? "The Socialist, Big-Government, Anti-Business, Left-Wing Obama Administration has gone too far left" is their basic conclusion.

For the far left, they've taken the opposite view that the Obama administration has not gone far left enough and that has "dispirited" the left and so they've concluded that they'd be better off not even voting. They believe that the President's attempts to work with, negotiate, and compromise with the Republicans shows him to be a weak passivist and not fighting hard enough for liberal causes. If the right believes you've gone too far left and the left believes you've gone too far right, chances are you are smack-dab in the middle and out of that comes an inherent frustration felt by both liberals and conservatives.

Both left and right-wing conclusions since the election quite simply miss the mark. This election was about ONE THING that can be summed up in 5 words; "Nine point Six percent Unemployment". Simply speaking, when unemployment is high, the voting populace gets frustrated with whichever party is in power and wanna "throw the bums out" to try something new. It matters not to most people from whence we have come, how deep the hole was that we are coming out of, what catastrophic circumstances DID NOT take place, and how much economic progress has been made, when the employment situation is not back to a level that most people are comfortable with, incumbents will get kicked out on their asses. It's as simple as that.

So when liberal talk show hosts like Ed Schultz go on and on about "how he's losing faith in the President because he keeps throwing olive branches out trying to work with the Republicans" , they miss the mark and seem to miss the point that Obama is the President of Democrats, Independents, AND Republicans and he MUST now find a way to work with one Republican controlled branch of government. When Republican leaders like Sen. Mitch McConnell and the "soon-to-be" Speaker John Boehner say "the American people have soundly rejected the Obama agenda" they also miss the mark and choose to overlook the fact that the Republican Congress poll even LESS favorably than the Democratic Congress.

The only thing that we can and should conclude after the midterm results is that the people are fed up and frustrated with political gamesmanship, partisanship, and placing "party above country". They simply want JOBS, JOBS, JOBS. If either party believes that Election 2010 gives them a green light to stay bullheaded and stubbornly rooted in party politics regardless of what's taking place in the lives of REAL PEOPLE, they will do so at their own peril. The people have spoken. Do you speak their language ?
Posted by Dubwise at 3:48 PM